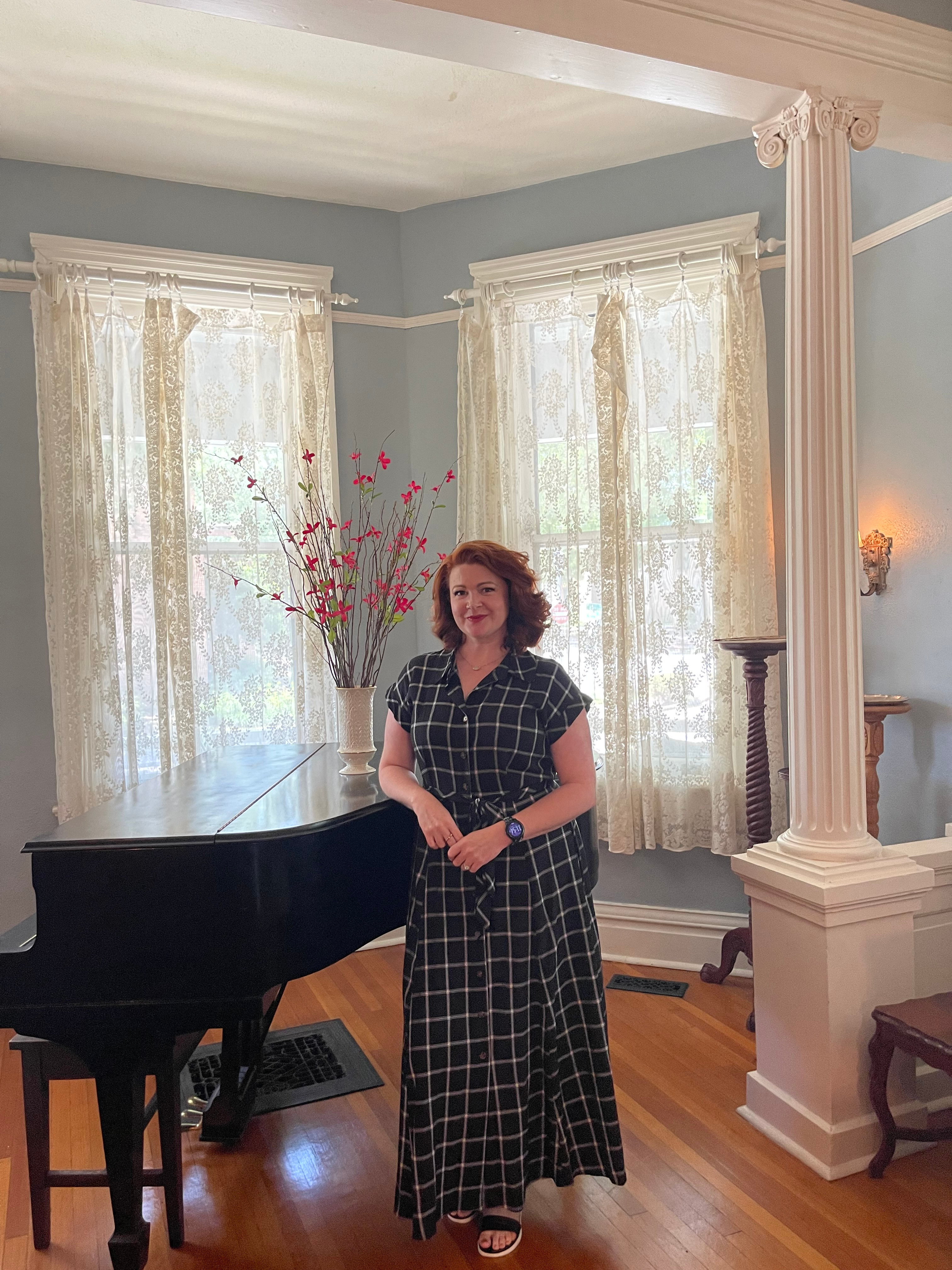 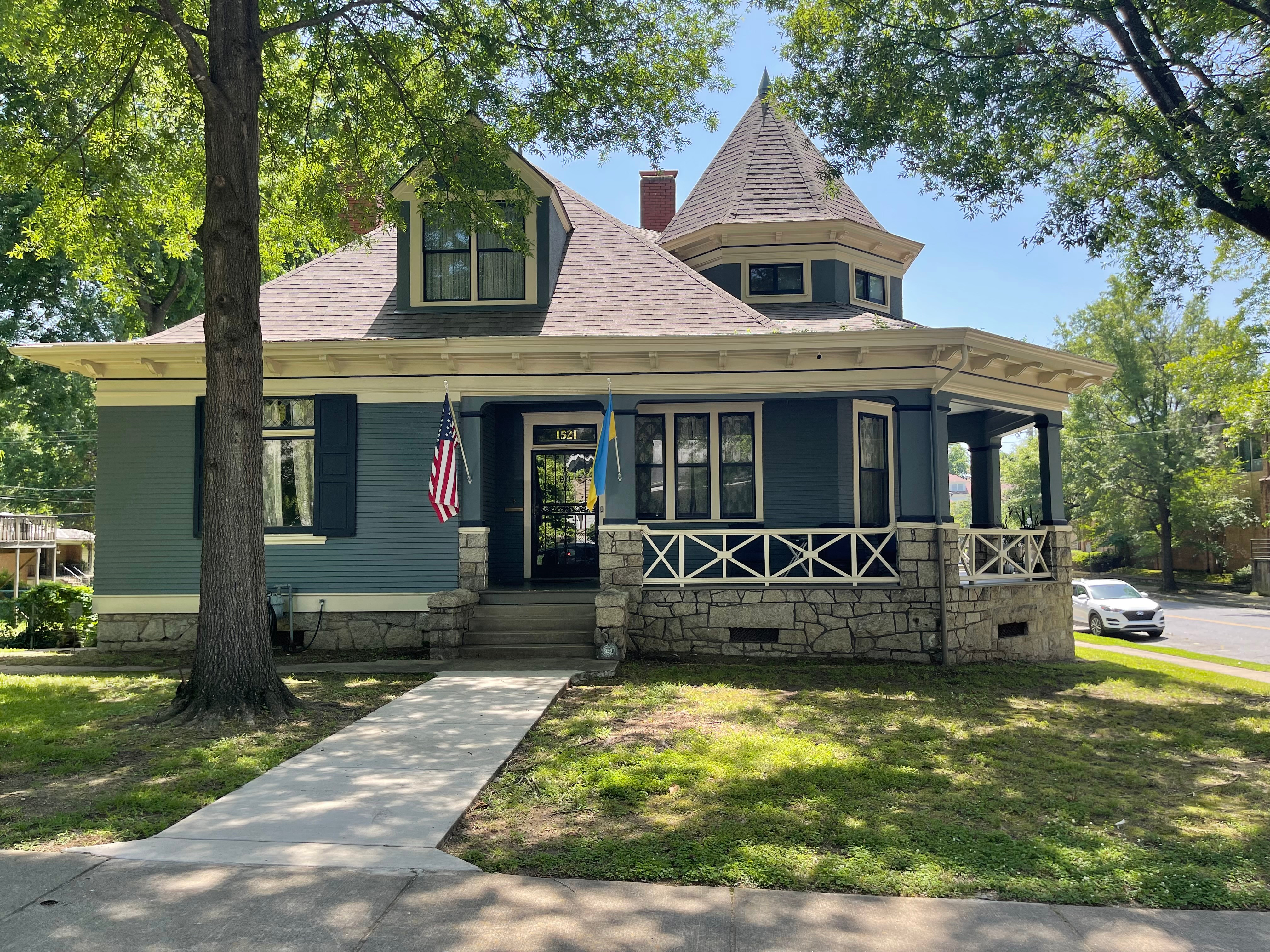 In 2020, after unexpectedly selling their Robinwood home quickly, Amber and her husband Chris bought the Wait house at 1521 Spring Street in Little Rock. The house was built around 1902 by Robert E. Wait, a lawyer, and business executive, born in Pennsylvania, but raised in Arkansas by wealthy parents.

Robert Wait, his wife Isabel, and their four children lived next door at 1515 Spring for many years. A QQA Chronicle story from February 1993 states that the Waits asked architect Frank Gibb to build the smaller house at 1521 Spring because Mrs. Wait wanted a one-story home. The 1970s-era QQA historic survey described the Wait house’s architectural style as “free classic,” or a mixture of Queen Anne and Classical Revival styles. A second story was constructed in 1925.

Amber Haugen and her husband Chris chose to live in the Governor’s Mansion Historic District because of the sidewalks, literally.

The Haugens had lived in the neighborhood before, in a newer home at 301 E. 15th Street.
They tried to purchase that house before they moved to Robinwood, but the sale fell through.

“We spent not quite four years [in Robinwood] . . . three and a half years. We loved that house, but all we talked about was coming back downtown,” Amber said.

After the Haugens left Robinwood, they rented a townhouse in the South Main area before finding the Wait house through realtor Tony Curtis. Working with Charles Marratt Restoration and Remodeling, they completed the bulk of the major renovations in 30 days between closing and their move-in date. The full renovation took a little under 10 months, much of it during the Covid-19 pandemic.

Before their move back to the Governor’s Mansion District, the Haugens volunteered as docents and house captains for the QQA Tour of Homes. In 2021, they joined the QQA so they could attend the members-only 5H Club events during July. “We started going to little events and those 5H events that summer was one of those things that just kept coming up and they were cool places, things you don't normally have access to. I got to meet [Patricia Blick, QQA Executive Director] through those events and just hearing her talk and hearing [Ann Ballard Bryan, QQA Education Chair] talk. I was like, these people are really intelligent. They know what they're doing. They've got a great purpose. I was just drawn in and wanted to be part of what was going on.”

When QQA Executive Director Patricia M. Blick asked Amber to act as chairperson for the 2022 Tour of Homes, she initially thought she was asked to act as a House Captain. “Patricia was like, no, no, like all the houses . . .and it sounded like fun. And it was, it was so much fun.”

Fun because Amber likes operations and logistics, something she does for a living in her position as District Sales Manager for Mohawk Industries.

Amber spent the first eleven years of her life living in Denver with her parents. They moved to Conway, where Amber graduated from high school and attended the University of Central Arkansas to earn a degree in interior design. She took classes at UCA from longtime QQA volunteer and former board member Toni Johnson. After college, Amber moved to Dallas and then to St. Louis, and then finally back to Arkansas in 2011.