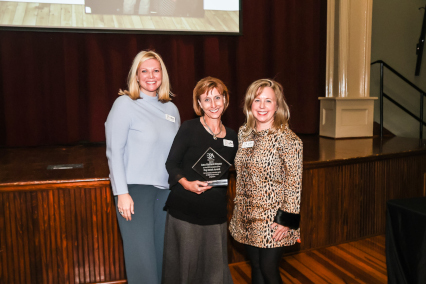 The QQA is pleased to present the 2021 Peg Smith Award to Ann Ballard Bryan. Ann Ballard Bryan was elected to the QQA board of directors in 2019. This was the second time Ann agreed to serve on the board. In 2021, QQA Board President, Molly McNulty, recruited Ann to serve as the Vice President of Education. It seemed like a natural fit since Ann is a professor and has been on the faculty of UCA for several years.

Ann took over her responsibilities as the Education Chair with gusto. She immediately started to look at ways to re-engage our members, not an easy endeavor with Covid-19 restrictions on place!
Her underlying premise of educational programs was to bring folks together for fun and by the way, they will learn something.

In the Spring of 2021 Ann pitched her idea for the 5H Club to the committee. The 5H Club stands for: History, Happy Hour and Heavy Hor d'oeuvres. Ann’s idea was to gather small groups together, at a historic location, and they would learn about the property and something the host wanted to share.Each 5H Club was “sold out” within hours. The attendees all had fun, learned something, and were eager to attend the following week. Attendees have encouraged the QQA to repeat the program next July.

Ann’s 5H Club initiative gave the QQA a real boost in exposure, interest, and also membership since it was exclusive to QQA members! All four events were covered in the Arkansas Democrat Gazette.
Without Ann’s ideas and efforts to bring the program to fruition the 5H Club would not have been realized.