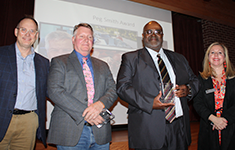 The Peg Smith Award has been given since 1980 to recognize “a Quapaw Quarter Association member whose volunteer work on QQA projects and programs has been particularly exemplary.”
The 2018 Peg Smith Award went to the Spring Tour of Homes Street Committee: James Metzger, Jeremiah Gardner, and Mike Metzler. For several years, these three volunteers are first on the scene to set up and the last on the scene to break down. The Spring Tour of Homes would not run as smoothly without their 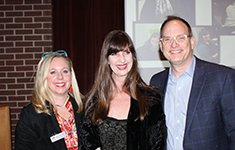 Beginning in 2000, this award has been presented sporadically by the QQA Board of Directors to recognize a member of the board for outstanding service.

The 2018 winner was retiring board member Laura Sergeant.

Laura Sergeant, a Peg Smith Award Winner in 2015, is the embodiment of an outstanding QQA Board member. Since joining the QQA Board of Directors, she has gone above and beyond her duties as a board member. Laura joined the QQA Board of Directors in 2010 and has served three complete terms. She has served as Board President-Elect, as well as two full terms as board president, and is currently serving as the Vice President of Advocacy.

She’s volunteered with the Spring Tour in nearly every capacity since she moved to downtown Little Rock. She chaired the tour in 2011 and 2012, and has stepped in to assist whenever called upon. She was part of the team that hosted a very successful 50th Spring Tour and helped with the important task of recognizing former tour chairs at the Sunday brunch. The Mother’s Day Brunch at Curran Hall is masterfully orchestrated by Laura and her co-chair Marcella Dalla Rosa each year, and has become so popular that it is regularly a sold out event.

Laura was instrumental in getting the Summer Suppers program started, has chaired the series since inception in 2015, and consequently raised tens of thousands of dollars to support the work of the QQA. She makes the time to attend nearly every QQA function, and is usually responsible for food, decorations or flowers. She won’t hesitate to ask for anything when the QQA needs donations, and she always offers to help out when she can. She’s the kind of board member and volunteer most organizations can only dream of.